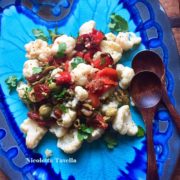 A few weeks ago I received the Dutch translation of Ursula Ferrigno’s last (2016) book to review. It’s called Flavours of Sicily and has been published in The Netherlands by Edicola Publishing.

It’s book no. 19 for famous British cookbook writer Ferrigno who is half Italian, has been teaching Italian cooking for years and is also known for her TV programs. This beautiful edition is printed on very nice mat paper and contains great pictures by David Munns (very nicely styled by Emily Kydd).

When reviewing, the first thing a picky Italian ex-translator notices is that the Italian names of several dishes are quite strange. For example “insalata di orangio di tarocchi” which in correct Italian should be “insalata di arance tarocco”. A little weird. I had already mentioned this to the lady who sent me the press release with the announcement about the book earlier in February, which already included several misspelled words, but there was no reaction to my observations. As I was flipping through the book’s pages I found more and more names written the wrong way (Abbacchio alla Cacciatovia, Asparagi e provolone conimenti spiedini, Provolone con olio do’livia, Triglia alla cartocchio, Zuppa di Fava con lemoni, Gelato di Cocomoro and so on) as if the Italian words were a phonetic transcription done by someone who doesn’t speak Italian. I don’t have the original version of the book but I think it also includes some mistakes because I found an English review reporting the presence of some errors. I find it quite strange that this has not been remarked by Remigio De Rienzo, the person who seems to have checked the Italian spelling as Ferrigno mentions in her thanks at the end of the book but hey, maybe he forgot his reading glasses. 🙂

Anyway, mistakes or no mistakes this remains a beautiful book with mouthwatering, easy recipes from beautiful Sicily. If you ask me if they are all Sicilian I’ll answer: no, they’re not. Some dishes are interpretations of Sicilian classics – and I think that’s totally OK – and some others simply come from other Italian regions, such as the gnocco fritto con salumi which is a classic from Emilia, the abbacchio alla cacciatora – the right spelling – from Lazio and the pappardelle with duck ragù which to me are more a Tuscan dish than a Sicilian one.

All recipes seem very tasty, very suitable to prepare at home and not too complicated, from classics like arancini di riso, panelle and pasta with sardines to the delicious sweets that Sicily is famous for such as cassata, cannoli and a beautiful chocolate-ricotta pie that I will definitely try soon. What I particularly like about the book is the big variety of recipes with vegetables and salads. All beautiful, tasty, often vegetarian and with an exciting variety of textures, colours and flavours. This is definitely a great book if you want to start learning the basics of Sicilian cooking, with no complicated dishes and very suitable for anyone who loves the regional Italian cuisine (by the way, I also offer cooking workshops on the Sicilian cuisine and you can find them here).

The dish I chose to try this time probably does not originally come from Sicily but from Naples: the cauliflower salad on page 44. The Italian name in the book is “insalata di cavolfiori” (cauliflower salad) but the text that introduces the dish calls it “fortified salad” (at least in the Dutch translation). A name that makes me think of the Neapolitan insalata di rinforzo, something that looks very similar to this and is usually made in Naples around Christmas.
It is a healthy and savoury salad prepared with boiled cauliflower, sun dried tomatoes (Ferrigno does not mention whether you should use the dry ones that need soaking or tomatoes preserved in oil), roasted bell peppers and typical Southern Italian ingredients such as capers, olives and flat-leaf parsley. Such a rich dish is very filling and perfectly suitable as a complete vegetarian meal.

Whether you have to buy the bell pepper already roasted is not really clear. I roasted some nice red bell peppers in the oven until the skin got all scorched and blackened and then peeled them. The original Neapolitan recipe uses vegetables preserved in vinegar and Ferrigno might mean those, sweet bell peppers in vinegar like the ones used in Italian (think of a classic giardiniera), Turkish and Croatian cuisine.
One or two finely chopped garlic cloves are also a nice addition to the original recipe – for example in the dressing – and if you steam the cauliflower instead of cooking it you’ll yield a better bite and keep a little more nutrients.
Make this salad well in advance and allow it to marinate in the fridge for at least a couple of hours so that it will taste even more delicious. Insalata di cavolfiori from Flavours of Sicily by Ursula Ferrigno

1 medium-sized cauliflower
55 gr. green olives, pitted and halved (I used twice as much since I find 55 gr. too little and such a weird quantity, probably due to the conversion from British to metric)
1 spoon of capers (I used capers preserved in vinegar)
2 tablespoons of sun-dried tomatoes, minced (I used tomatoes preserved in oil)
1 roasted red bell pepper, cut into pieces
1 handful of flat-leaf parsley, finely chopped
2 spoons of good extra virgin olive oil
2 spoons of red wine vinegar
sea salt and freshly ground black pepper

Divide the cauliflower into florets. Rinse them well in cold water and drain.
Put the florets in a large pan and cover with cold water.
Add 1 teaspoon of salt and boil (I’d actually add the salt when the water is already boiling, otherwise reaching boiling point will take longer).
Boil for 3 minutes, drain and rinse with cold water.

Mix together oil and vinegar in a small bowl. Spread over the vegetables and toss again. Cover with cling film and let the salad rest for 1 hour before serving. 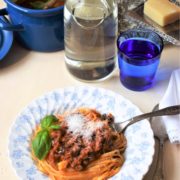 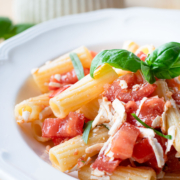 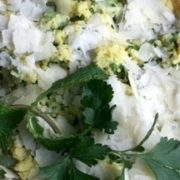 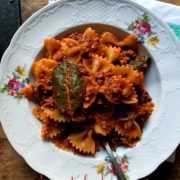 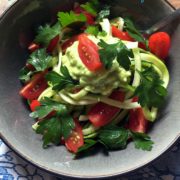 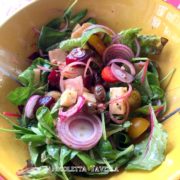 The chocolate mousse that thought it was a semifreddo (and was totally righ...
Scroll to top