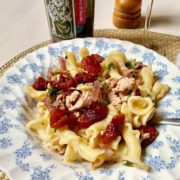 This Sicilian pasta is actually more Sicily-inspired than really Sicilian since it’s another one of my “fusion” dishes. The pasta is Tuscan (wonderful Gigli toscany by Pasta Panarese), the sun-dried cherry tomatoes come from Noto, Sicily, and the olive oil I used for drizzling the finished plate is an Apulian one, the amazing Empress by BONO, one of their oils inspired by Tarot cards. I’m totally in love with their range of extra virgin olive oils and not only because I’m a big fan of Tarot cards myself. The Empress is like no other oil I’ve tasted before: you can actually smell and taste cherries! What a great sensory experience that gives.
The pastas from Panarese are equally amazing: great Italian (Tuscan, to be precise) durum wheat mixed with the purest local water from Mount Amiata enables this producer to create a pasta with fantastic taste and bite.

I met these two great producers during the Amsterdam Bellavita 2019 fair and now I’m a fan. The sun-dried cherry tomatoes come from Noto, Sicily , and I found them at a little street-market the first time I went to this beautiful town during one of my culinary holidays. So this dish is influenced by several Italian regions which, for me, is nothing new under the sun. 🙂

In this recipe the fresh herbs are gently fried in oil at the beginning of the procedure, thus not added at the end. It’s a classic way of using herbs – especially parsley – of some Italian mammas including mine: I recently saw her doing this while she was cooking and I remembered how nice it is to infuse the olive oil with the herbs and, at the same time, to soften them by cooking them thoroughly (raw flat-leaf parsley added at the end can be quite chewy).

If you can’t find lovely Sicilian sun-dried cherry tomatoes you can of course use normal ones, even the ones preserved in oil. I prefer the dried ones since they’re less fat. And the tuna is good canned one, pole and line fished for more sustainability. Gently fry the chopped onion with the garlic clove and the finely chopped herbs – leaves only – in 3 spoons of e.v. olive oil until tender.

Bring a big pot of water to the boil and then add some salt.

In the meantime, soak the tomatoes until they’re soft, then drain and chop coarsely.
Add them to the onion and garlic and cook for a couple of minutes.

Cook the pasta until al dente, drain and toss with the sauce.
Add the crumbled tuna and some black pepper and stir. 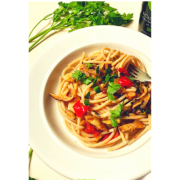 Spaghettoni with shiitake and chilli 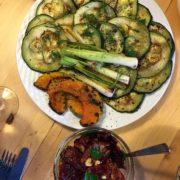 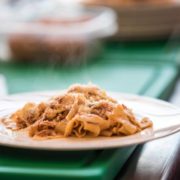 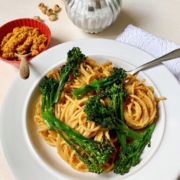 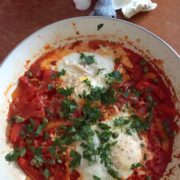 Tiramisù with strawberries and limoncello
Scroll to top